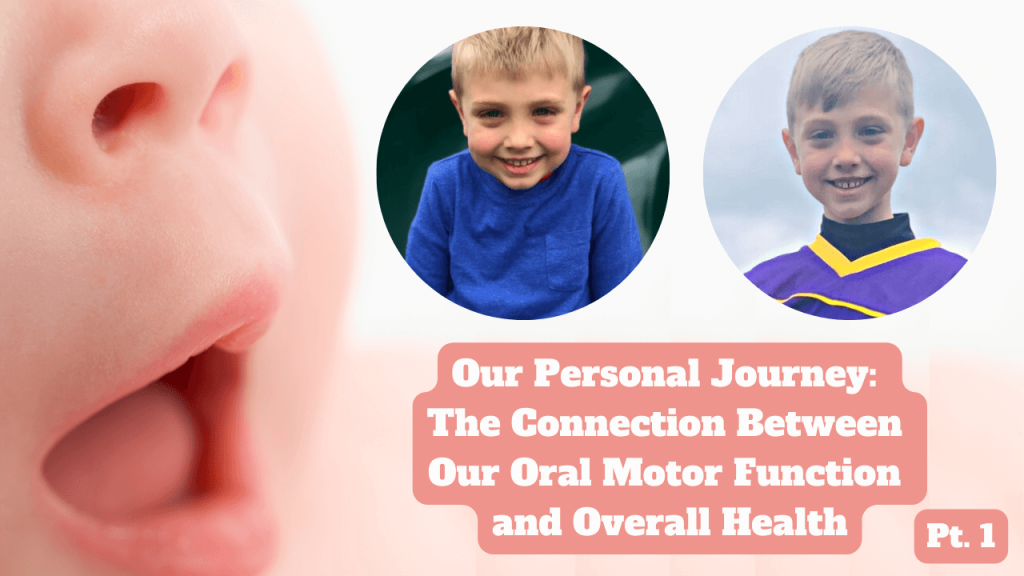 Our Personal Journey: The Connection Between Our Oral Motor Function and Overall Health.
By: Dr. Meagan McGowan

Over the next several months our family will share our experience as we take a deep dive into improving some of our most tedious health challenges.  In a multi-part series, we will share our journey as we heavily focus on our oldest son Briggs and how his struggle with allergies has become a catalyst for all of us to take a deep look into the connection between our oral motor function and overall health.

A quick step back in time so you understand our ‘Why’. 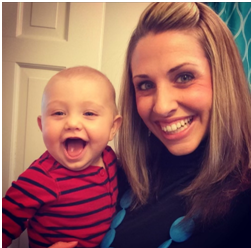 Briggs’ was a very healthy 9.8oz baby, born in the comforts of our home, now 8 years ago!  As a first time Mom I read everything, exposed myself to all versions of prenatal support, happily learned and swapped out personal care and household products, ate well, moved well, and mentally prepared myself for my invitation into parenthood.  I was determined (and still am!) to give this child the greatest foundation of health, all that I can influence anyhow.  Briggs thrived as a baby which seemed only appropriate for the efforts invested while I was pregnant.

….Then I was introduced to the feelings housed in my Mommy gut.  I kept hearing that term referenced as those instincts you don’t know you have until you sign up to care for a small human!

Feeding was going well by measurement of numbers.  He was gaining weight, eating the appropriate amount for his stage of development, however his latch was exceedingly uncomfortable.  He spit up with every burp which at times took a minimum of 15 minutes.  He wouldn’t successfully latch again until he burped.  Again as a new Mom I thought we were in the early stages of young mechanics and his mouth just needed to mature.  After a few weeks we would be in the clear.  That wasn’t the case and at 3 months I inquired for the first time about his mouth recognizing how thick his upper lip frenulum was.  The two qualified providers inspected, however did not feel it was severe or contributory enough to put him through unnecessary intervention and discomfort.  On our way we went.  Eventually he must have compensated well enough because his latch no longer hurt, he took on solids like a champ, and seemed like all was well.

At around 12 months I inquired again about the frenulum beneath his upper lip.  The space between his two front teeth was considerable and the tissue was connecting to the underside of his upper gum.  This time I was told the same, it wasn’t severe enough to put him through such discomfort.  Wait and see if it becomes an orthodontic issue,   they’ll take care of it then.

As Chiropractors we are aware of some of the negative effects of sustained oral ties in children, affecting their ability to eat, speak, and swallow, as well as possibly contributing to focus and coordination issues.  Briggs displayed none of these.  We were not aware or told of the longstanding issues that sustained oral ties could be contributing to: his poor breathing, poor sleep, inflammation and allergies, and now crowded teeth and narrowed jaw. 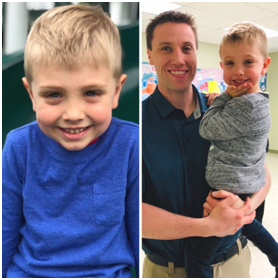 Now looking back at pictures of his swollen eyes starting at the age of 3, listening to videos of his nasal sounding voice, his then little body was expending so much more energy to function because of the inflammation he couldn’t get rid of.  We were very frustrated because no matter our effort nothing seemed to help him.

Like most, we initially pigeonholed his symptoms to seasonal inflammation.  Then we expanded our reasoning to allergies in general, because his symptoms were outside the seasonal time frame.  We thought he must intermittently be exposed to something he’s sensitive to because his swelling and inflammation would come and go.  Year after year our plan would shift–  supplements for preventative measures, then maybe we threw off the ratios of the immune system trying too many preventative measures, so then we’d back off, food elimination, washing hands after petting an animal, testing for mold sensitivity, etc. etc.

As health conscious as Briggs has become through his own fruition, his suffering remains the same.  Congestion, productive sneezes causing him to run for tissues, dark circles under his eyes, head and neck extended while sleeping, breathing heavy and labored while sleeping, nightmares and wakeful sleep, and now cavities.  CAVITIES!  In the boy who brushes, flosses, drinks only water, eats whole organic foods and could care less about carbs and sweets, he was defeated, I was defeated.  How do you explain to your kid who willingly contributes to his health, consciously everyday on his own, that it seemingly isn’t good enough, you still have cavities.  Then to listen to the mainstream Dentist tell him he just has to do more of the same plus maybe this treatment (this toxic treatment) to protect his teeth was infuriating.  It was then I decided to take matters into my own hands.  After an incredible conversation with a friend who was sharing similar frustrations with her son, and a whole lot of research, we have started down a path that has our family excited to invest our time and efforts into true measures that will help Briggs, and now maybe my husband Matt, and our newborn daughter Navy!

Stay tuned for details of Briggs’ treatment plan, including where and with who, as well as what we have done for Navy.  As a bonus, see what Matt is looking into for his long standing struggles!