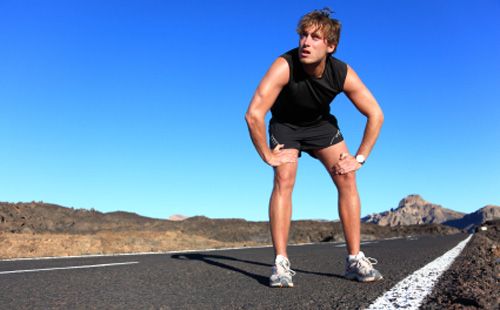 A Side Stitch Fix

Most people who have run for fun or sport are familiar with the dreaded “side stitch.”  When present, a side stitch can be down right debilitating to the runner. It presents as pain located along either side of the torso near the lower ribs that can be described as a tightness, a cramping, or even a stabbing sensation.

So what actually causes a side stitch?  How can we treat it?  More importantly, how can we avoid it?

A side stitch is actually a spasm or contraction of a section of your Diaphragm muscle which sits inside of your ribs and spans across your trunk like a trampoline. Its job is to separate the lungs from your intestines, but more importantly to aid in the inhalation and exhalation of air from your lungs.  As you inhale, the diaphragm has to relax and expand down into your abdomen to let the lungs fill with air.  As the diaphragm contracts it presses upwards on the lungs helping to expel air.  When the diaphragm goes into spasm or contracture, it pulls hard on the lower two ribs causing pain and difficulty breathing.

There are several reasons why the diaphragm would go into such a contracture, but they are all caused by the same thing – improper breathing technique.  Many of us are “chest breathers,” meaning that we only inhale and exhale shallow breaths expanding the lungs to only a portion of their true capacity.  In this situation, the diaphragm is not relaxing and contracting through its full range of motion.  If we do this day in and day out, we are over-using the diaphragm in a suboptimal way.  It’s analogous to me giving you a weight and having you do a bicep curl, but only the top third of the range of motion. Obviously, this would not be the best way to use that bicep muscle.  Same thing with shallow breathing and the diaphragm muscle.

Many athletes seem to get side stitches only during a game or race and the reason for this is likely psychosomatic, meaning the increased level of anxiety of being in a game or race is making breathing more rapid and shallow than it was during a relaxed practice. Others seem to get side stitches only when running in the cold when, again, improper breathing and the failure of the lungs to maximally expand due to cold air can trigger the spasm.  Sometimes having eaten a larger meal too close to race time can make it more likely that you’ll experience a side stitch. The presence of food in your stomach affects the ability of the diaphragm to expand and contract.

So how can you get rid of a side stitch?  Suggestions include pressing on the spot, stretching, and cessation of activity, but ultimately the correct answer depends on the situation you are in.

The best thing to do if you are simply running for exercise or at a practice is to stop the activity momentarily and practice some deeper slower breathing.  If it doesn’t subside, I would suggest lying on your back with your knees bent (like the start of a sit up) and practice taking slow deep breaths while expanding your abdomen out 360 degrees in all directions.  You can check for this by feeling the tension build in your abdomen and lower back with your hands.  Usually after two minutes of deep diaphragmatic breathing you will be good to go.

If you’re in a game or race situation and cannot stop the activity, you need to focus on slowing your breath down and elongating the breath until the spasm stops.  During a side stitch, do not  drink a ton of water thinking the spasm is from dehydration, again the presence of extra water will fill your stomach and negatively affect the diaphragm.

If you’re someone who gets frequent side stitches, you need to re-evaluate your breathing techniques.  There are lots of great videos out there on youtube about “diaphragmatic breathing.”  I encourage you to check them out and see how you can incorporate some of those techniques into your activity.  If you have any questions about whether or not you breathe incorrectly, you can also come in and have one of us check it out for you.